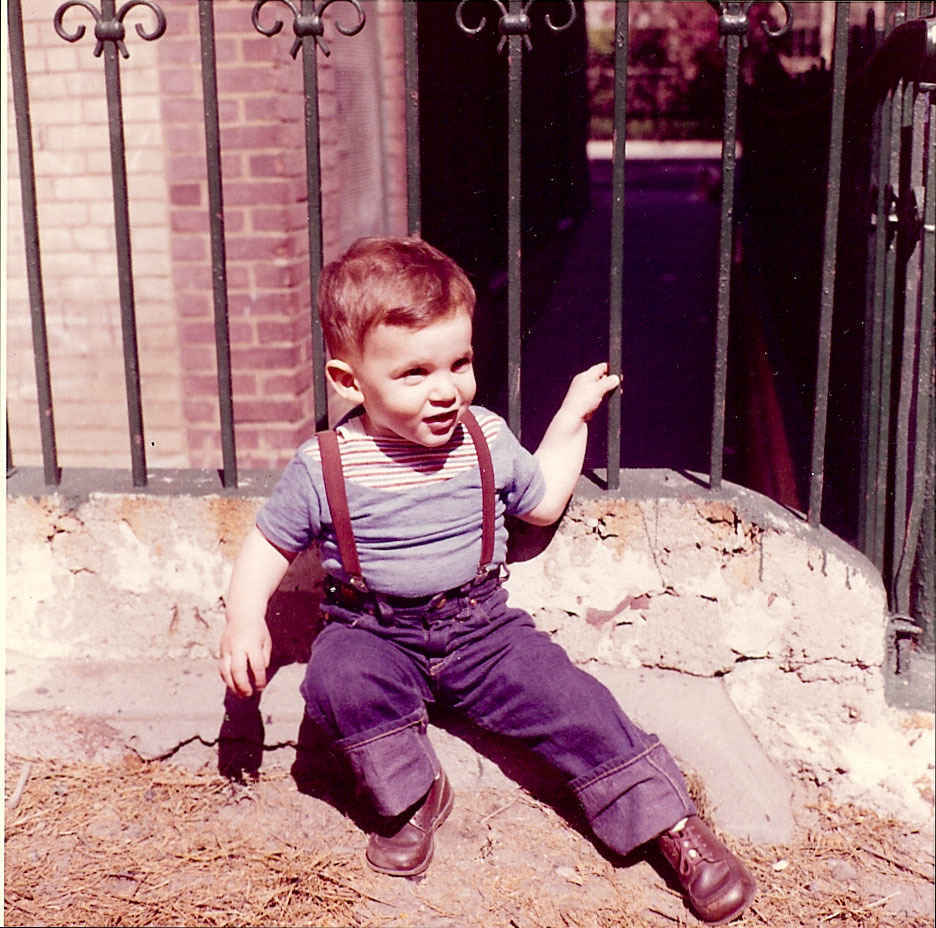 Give now! Support the work of Tupelo Press as generously as you can

I’d like to tell you a little bit about why I've chosen to be part Tupelo Press' 30/30 fundraiser.

That's three-year-old me up there, decked out in my red suspenders, favorite shirt, shoes that I thought were the coolest, and the smallest size Lee’s jeans-for-children—which were obviously too big for me; look at the size of those cuffs!—sold in the Lee’s store on Northern Boulevard around the corner from my grandparents' house. Mr. Davis, the man who owned the store, was a close family acquaintance, and my mother had gotten it into her head that I would make a great model for those jeans. She figured that if she could put together a good enough set of pictures, Mr. Davis might use me in an advertising campaign, or something like that. So she dressed me in that outfit and took me out in back of our building, where she shot a lot of pictures. No matter how hard she tried, though, she couldn’t get me to stand still long enough for the Lee’s label just above my young butt to be clearly visible in the frame of the picture. My modeling career was over before it started.

Still, even if things had worked out according to my mother’s plan—who knows the kind of life I might have led if modeling had indeed been in my future!—I like to think I would’ve become a poet anyway. Because what poetry has given me is something I don’t want to imagine my life without: a way of speaking (when I write it) and of hearing (when I read it) truths about myself and the world that it would be difficult at best to say any other way. On a personal level, those truths are rooted in my experience as a survivor of childhood sexual violence. On a more global level, they emerge from the connections I hope never to stop exploring between that experience and what it means to live an ethical life, in the broadest and most inclusive sense of that term.

I have always believed that poetry does its work in the world slowly, one poem, one book, one reader at a time. Certainly this has been my experience, both in terms of how my books and my poems have moved through the world and in terms of the work poetry has done in me, which would have been impossible without small presses like Tupelo Press and the books they publish. That’s why I accepted their invitation to participate in the 30/30 project. It’s one way I can give back to a community that has given me so much.

If you’ve been a supporter of my work in the past, if poetry in general is important to you, please, click the Donate Button, and give as generously as you are able. I’ve set a modest fundraising goal, $400, because I believe in under promising and over delivering. I hope you will help me over deliver for this very worthy cause.

With gratitude and respect,

As a poet and essayist, Richard Jeffrey Newman’s work is rooted in the impact of feminism on his life as a man, especially as a survivor of childhood sexual violence. As a co-translator of classical Persian poetry, he writes about the impact of that canon on our contemporary lives. His own books of poetry are, most recently, Words for What Those Men Have Done, (Guernica Editions 2017) and For My Son, A Kind of Prayer (Ghostbird Press in 2016). CavanKerry Press published his first book, The Silence of Men, in 2006. His most recent book of translations is The Teller of Tales: Stories From Ferdowsi’s Shahnameh (Junction Press 2011). Newman is on the Board of Directors of Newtown Literary, Queens NY-based literary non-profit, and curates the First Tuesdays reading series in Jackson Heights, NY. He is Professor of English and Creative Writing at Nassau Community College, where he also serves as secretary of, and writes the blog for, his faculty union, The Nassau Community College Federation of Teachers (NCCFT). His website is www.richardjnewman.com.